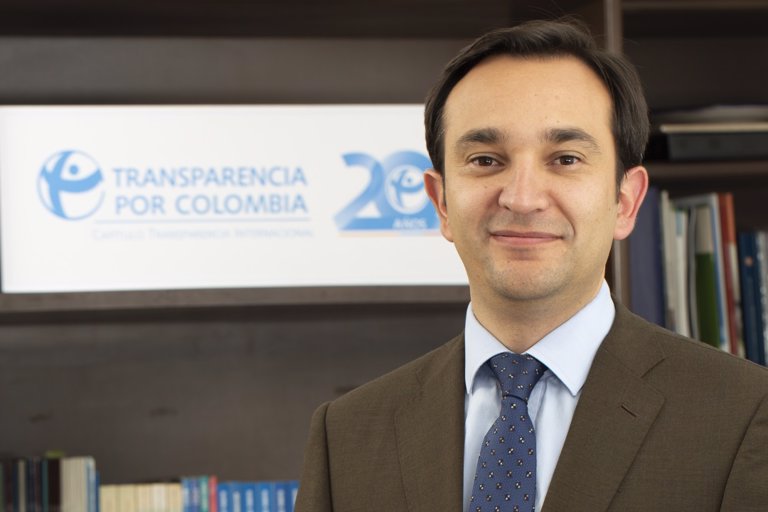 Accustomed to demanding accountability from public institutions and the private sector, the NGO Transparencia por Colombia, which is the national chapter of Transparency International, has been implementing the Global Standard for CSO Accountability to improve its accountability practices. At the same time, the organization has made efforts – together with other peer organizations – to promote CSO accountability across the country

Taking advantage of Transparencia por Colombia‘s recent publication of its 2019 accountability report, we spoke with Andrés Hernández (AH) and Jennifer López Flores (JLF) about their work around the Global Standard.

GS: How has Transparencia por Colombia used the Global Standard in its own work?

AH: Transparencia por Colombia‘s endorsement of the Global Standard (GS) has its roots in our own involvement with civil society accountability initiatives around 2005. Back then, we launched the NGOs for Transparency Network (Red de ONGs por Transparencia), aimed at fostering the independent role of civil society as an important actor that contributes to development, peace and human rights conditions in the country in a context where CSOs were being questioned by the national government. Therefore, we recognized the need to advance self-regulation processes within the sector in order to anticipate eventual legislation which could limit the role of civil society organizations. This, in turn, helped raise awareness about the importance of accountability of the CSOs themselves.

Ten years later, the member organizations of the NGOs for Transparency Network had the possibility of working with the Global Standard, which entailed several benefits. First, the Global Standard is a widely-accepted instrument at the global level; second, it is a tool easy to understand, own and implement and, finally, it serves the purpose set forth by Transparencia por Colombia since 2005 regarding the defense of civil society and civic space. Yet, it is also an instrument that contributes to institutional and organizational strengthening. The latter was the main driver for implementing the Global Standard within our organization since I was appointed executive director in 2017. This is not only an outward but also an inward exercise that serves to strengthen our organization by helping identify future areas of opportunity while also outlining a plan for improvement.

GS: Can you describe the process for reporting on compliance with the 12 commitments of the Global Standard by Transparencia por Colombia in its 2019 annual report?

AH: With the technical and financial support of the Rendir Cuentas Initiative a couple of years ago, we adapted the Global Standard in Colombia as part of the work of the NGOs for Transparency Network, especially regarding its self-evaluation exercise and templates related to the Global Standard (GS). While the Rendir Appis an easy to use tool, which allows for a quick assessment, the spreadsheet-based self-assessment entails a more in depth evaluation of progress made around the GS commitments.

Applying the Global Standard has been a learning process for our organization. The first year consisted of putting all the pieces together; in the second year, we made adjustments and best identified the evidence supporting our responses. In the third year, this exercise allowed us to report progress and weaknesses towards fulfilling all 12 commitments of the Global Standard.

The steps undertaken by Transparencia por Colombia for the 2019 accountability report consisted of completing the Excel-based self-evaluation related to the Global Standard by the executive management of our organization. This document was then shared with the management team and submitted to our General Assembly as part of our annual accountability. Finally, the accountability report was disseminated on the website for public access.

GS: Of GS 12 commitments, in which ones did Transparencia por Colombia report more progress during 2019?

AH: The Global Standard has been very useful as it has broadened the horizon of the issues we are accountable for and helped us identify issues where further work is required. In 2019, we reported increased progress on commitment #1 (on Justice & Equality) and commitment #2 (on Women’s Rights and Gender Equality) of the Global Standard. We also reported relevant efforts around commitment #6 on strong partnerships and #7 on advocating for fundamental change.

Concerning commitment #1, we have identified corruption as one of the country’s main obstacles to building a more just, inclusive, equitable and peaceful society. Consequently, we have been working on the linkages between corruption and human rights and poverty, by investigating how corruption has led to the violation of human rights in the country.

In addition, I would like to mention our work – together with the TI chapter of Peru and Venezuela – on corruption risks affecting the Venezuelan migrant population on the border areas. While we reported this work under commitment #6 (on Strong partnerships), it also relates to commitment #1 (on Justice and Equality).

With respect to commitment #2 of the Global Standard, although Transparencia por Colombia had conducted specific initiatives, this issue had not entailed an in-depth institutional reflection exercise within our organization in the past. Currently, we can report that our organization not only promotes the principles of gender equity, but it has also implemented programmatic lines of action aimed to support women and the LGTBI community, as well as expanding political participation from a gender perspective. We have also contributed to the analysis of sexual extortion and its linkages to corruption as part of Transparency International’s global work.

JLF: We would also like to highlight our work on commitment #3 (A Healthy Planet). We only started to address this issue with the Global Standard. From our first year of implementing the Global Standard, we realized that it was an issue that needed to be worked upon; therefore, we started to approach it during the second year and now we can report some actions during our third year. Although an external programmatic area of work has not yet been implemented, we have been adopting various measures within our organization. Our initial response focused on internal actions, by mapping out issues such as our staff travel, use of transportation to work and mobility (in particular cycling to work), as well as our efficient use of resources (stationery, water and electricity) to reflect on how to incorporate this issue into our organizational culture.

GS: Which commitments need to be addressed by Transparencia por Colombia in more depth in the future?

AH: We identified three commitments or themes at our general assembly of members this past year: (a) to deepen our focus on diversity and equity under commitment #2; (b) to strengthen our human resources internal processes; and (c) to promote a more sustained dialogue-based approach with our partners in order to create value added in particular regions of our country. In this regard, we presented a proposal to our Board of Directors for a strategy with a territorial scope. It is thus fundamental to examine how to strengthen our dialogue with local partners in terms of a respectful dialogue based on mutual knowledge to outline areas of work for lasting change in particular regions of our country.

GS: How has the Global Standard been embraced among members of the Transparencia por Colombia team and external partners?

AH: CSOs in Colombia devote the first quarter of every year to putting together their own accountability reports for submission to the national authorities. The preparation of such report requires the involvement of a wide range of people from our organization. In some occasions, our staff wondered about this new format for our accountability report, which differs from our previous one that used to describe the projects implemented and achievements. This has posed some challenges in shifting how we become accountable.

In addition, the Global Standard approach has led to questions about our interaction with the target groups with whom we are involved. Although I would think that this was done relatively well at Transparencia por Colombia, since in all the projects we have tried to identify and collaborate with partners, formulating the projects jointly and carrying out sustained processes of participation and feedback, capturing them in a report with concrete examples not only in terms of processes, but also in terms of results becomes a challenge. In this regard, I would like to highlight the work carried out by the Anti-Corruption Legal Advice Centers (ALAC) as by looking more closely at the needs of ALAC users interested to receive legal advice in alleged cases of corruption, we started to work on whistleblowers’ protection.

Initially, the new way of presenting the accountability report based on the Global Standard also attracted the attention of the governing bodies. Yet, over time it has been understood that it is not only a matter of presenting the positive results of our work to our members’ assembly, but also of questioning and figuring out solutions for certain issues together with them.

JLF: Likewise, there have been challenges in sharing this accountability methodology to the larger CSO sector because we do not want to present the Global Standard as a comparative measurement exercise among CSOs. Therefore, our awareness raising efforts around the Global Standard have underlined the self-reflective nature of this process in order to promote internal strengthening of an organization. However, this process requires some time for self-reflection within each organization. On the other hand, Colombian CSOs are obliged to report on various issues or formalities according to national law which, in addition to the self-reflection process, demands even more time and work from each team. This can become a challenge when applying the Global Standard more widely.

GS: How does engagement with other key stakeholders get promoted within Transparencia por Colombia’s activities?

AH: First, our organization carries out an institutional strategic planning exercise on a regular basis – being the most recent one 5 years. To do so, we involve external actors through a dialogue with the state, business and civic organizations, and most recently with the media and academics in order to understand the external environment, achievements and future areas of work. Likewise, we involve our governing bodies and our staff teams, and for particular actions in our overall planning, we try to count on the inputs or contributions of the beneficiaries or target groups of our initiatives.

After the strategic planning, our organization develops a work program based on the results of the previous year as well as from the lessons learned from our projects. This work program is then submitted to the board of directors for consideration. The implementation of our annual work program is reviewed periodically by involving our staff and, and by our governing bodies at mid-year and at the end of the year.

In addition, I would like to emphasize that we benefit from the contributions or feedback from groups we work with for distilling lessons learned, as well as for the particularly initiatives such as the above-mentioned territorial strategy or our institutional communication strategy.  In fact, our recently approved communication strategy includes a fairly important dimension of listening to our counterparts within the state, the private sector, and the media about what Transparencia por Colombia means to them and where we are not working that we should pay attention to. 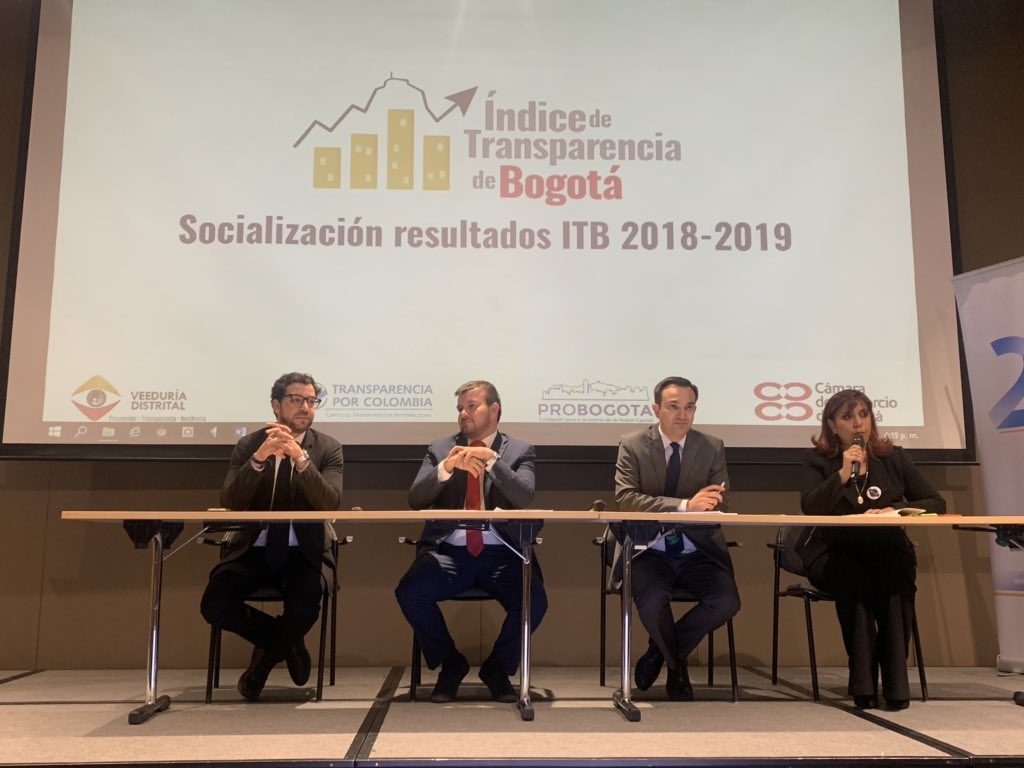