The use of the Global Standard for re-grating to local CSOs in Macedonia. 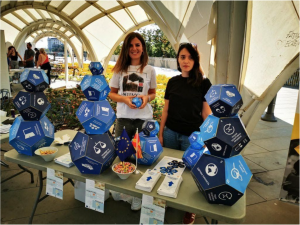 MCIC promotion of the Global Standard during the Civil Society Day on September 14, 2019 in Skopje, Macedonia.

Founded in 1993, the Macedonian Center for International Cooperation (MCIC) is a nongovernmental organization focused on the development of civil society and active citizenship. It does so by building the capacities of local activists and CSOs. In addition, MCIC is a member of the Balkan Civil Society Development Network (BCSDN), which is a partner of the Global Standard for CSO Accountability.

I recently talked to Aleksandra Savevska (AS), project officer from MCIC, in order to learn about how her organization is implementing the Global Standard for CSO Accountability.

GS: How did MCIC learn about the Global Standard for CSO Accountability?

AS: I am responsible for the Program on Sustainable Civil Society – State Funding of Civil Society Organizations, which is a EU- funded multi-year program aimed at fostering an enabling environment for civil society in Macedonia, as well as at enhancing CSO effectiveness. Our main focus is, on one hand, to promote more transparent and accountable procedures among the state institutions that provide support to CSOs in the country, while, on the other hand, to build CSOs capacities to become more effective in the use of the resources provided by the State institutions in order to deliver the agreed services and uphold citizens’ rights.

Given that MCIC is a member of BCSDN, Ilina Nesik, her executive director, brought the Global Standard to our attention, at the time when the Global Standard was still being developed. This sparked our interest on how to mainstream the Global Standard in our own programming, particularly as many of our programs have emphasized good governance issues such as transparency and accountability.

GS: Why is MCIC interested in the Global Standard?

AS: In recent years, the main vehicle for mainstreaming the Global Standard has been through our Sustainable Civil Society Program – State Funding of Civil Society Organizations, where we have relied on the Global Standard to improve the state support systems for civil society in the country – from the procedures for applying for funding to evaluation of projects -, as well as to build CSO capacities.

In this regard, we engaged with the Department for Cooperation with Civil Society, as some government officials had raised issues about the capacities of local CSOs and their ability to make effective use of public resources. Thus, MCIC conducted advocacy work among all ministries which provide support to civil society in the country. Thus, the Global Standard became a key resource for this work.

GS: How has MCIC operationalized the Global Standard?

AS: Over one-and-half year, MCIC set up a re-grantee scheme to support CSOs’ good governance principles and values which were very much aligned with the Global Standard’s commitments. Through this grants’ program, MCIC held a call for proposals, which required each CSO applicant to fill out a questionnaire that touched upon many of the commitments from the Global Standard, in particular from Cluster C on ‘What we do internally”. Therefore, each applicant had to go through a checklist and reflect upon the extent to which they lived up to existing standards and where they fell short of it. Then, the applicant had to identify its gaps as well as the support needed, and come up with a plan for enhancing its internal organization’s governance principles which would be part of the proposal to applying for a grant. MCIC finally selected 10 CSOs for support during one year so they could bridge those previously identified capacity gaps. The Global Standard served as a reference while there was flexibility for each CSO to select the commitments where support was mostly needed based on the size of the organization, etc.

Since then, MCIC had two additional calls for proposals, and the last one is currently under way. The second call for proposals focused mainly around CSO transparency issues as a result of feedback shared by CSOs, as well as donors – both corporate organizations and international cooperation agencies. This feedback emphasized the need for CSO transparency not only towards donors but to their primary constituents or stakeholders, that is, to those with whom they work and are affected by CSOs projects.

The reference to the Global Standard also came up during conversations with the government when there were attempts to impose stricter regulation for civil society in the country. This issue initially emerged in 2006-2008 when the visibility of civil society as a development actor increased in Macedonia. So, MCIC and other CSOs advocated for self-regulatory mechanisms. It was finally agreed with the government that each CSO would make public its annual narrative and financial report. We are now discussing the adoption of a Code of Conduct for the civil society sector, for which we rely on the Global Standard and its indicators, as well as on the Istanbul Principles for Development Effectiveness as key reference documents. We do keep in touch with the government on this topic through the Council for Cooperation, which is an advisory body made up of 16 CSO representatives and 15 officials from government bodies, including the representatives of the ministries that provide financial support to CSOS to deliver services.

Last but not least, we recently translated the Rendir app, a self-assessment tool of the Global Standard, into local language and we conducted a test with 6 local CSOs. We were about to embark into a greater promotion of this tool, yet we put it on hold due to the COVID-19 situation which prevent us to hold meetings.

GS: Do you have any recommendations for similar organizations exploring to embark on the same journey of adhering to the Global Standard?

During the next phase, in addition to mainstreaming the Global Standard across our organization’s programs, we need to explore further how to engage with donors in Macedonia because if EU or USAID support the use of the Global Standard through their own funding windows or call for proposals for civil society, we could get greater support for it.

Introduction of the Global Standard among CSOs practitioners in Macedonia.