An experience of soliciting feedback for tapping into local knowledge for disaster relief and recovery efforts in St. Thomas 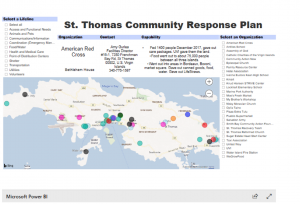 We recently talked to Imani Daniel, Director (ID), St. Thomas Recovery Team to learn about her experience in managing feedback during an emergency situation

GS: Can you tell us briefly about yourself?

ID: I am from the Virgin Islands, which is a small place, so I have connections with nonprofits, government and the small business sector.  This helped me become a strong liaison between federal partners and local actors on the ground when the hurricanes hit our island.

In November 2017, we started to formalize St. Thomas Recovery Team (STRT) which is a coalition of community stakeholders that are cooperating around St. Thomas’ long term recovery response, resource management and resiliency planning from hurricanes Irma and Maria in 2017. For this, we created various working groups on: donations, volunteers, food, construction assessments, etc. I initially became the Board Chair and then started to serve as its executive director in February 2019 as a full-time job. We are now in a situation where we are still recovering from two devastating hurricanes within two weeks, and in the middle of a pandemic, while it is also hurricane season.

After this firsthand experience, I was selected as a Global Giving’s Disaster Feedback Fellow in 2018 as part of a cohort of individuals from around the world dealing with feedback related issues such as refugee crisis -which are human-caused disasters. One important aspect was how feedback data gets managed and the importance of well documented feedback for its subsequent analysis. 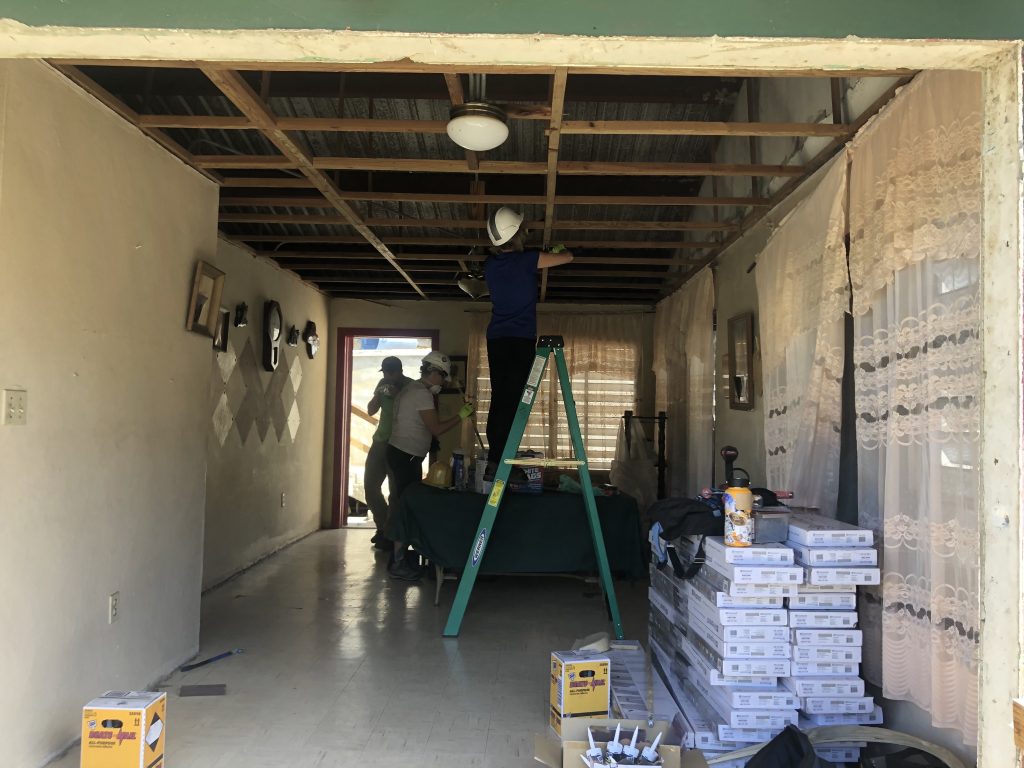 GS: When, why and how did feedback become an important aspect for you?

ID: Feedback became a more prominent issue to me with the two devastated hurricanes that hit Virgin Islands in 2017. Before then, our last big hurricane was Marilyn in 1995 so we had become a bit complacent by taking hurricane season for granted, and there were no strong disaster preparedness organizations. So, during the 2017 hurricanes, we started informally by relying on our local connections and leveraging our social capital early on.

Everything started with a basic question: ‘What do you need?’

Ahead of hurricane Irma, which struck the islands as category 5 hurricane in early September 2017, some local people started delivering sandbags and boarding up houses. Then our relief efforts focused on providing food, shelter and medicines. Personally, I started by delivering ice to people. I remember checking with one of my grandmothers’ friends who was taking diabetes medication which needed to remain cool. Therefore, we started looking for those who had generators to making ice.

We then connected with the diaspora through Facebook or WhatsApp, that is, people from the Virgin Islands that were emotionally affected by the phenomenon but not physically affected, while we were still trying to clean up the debris. Volunteers abroad, mostly in the continental USA, helped organize the information on people’s needs and get it back to us who were working on the ground, yet we faced connection problems.

GS: How did you reach out to the most vulnerable people immediately given the constraints generated by impact of the hurricane? Which channels did you use?

ID: One particular feature of the situation we faced was interacting with people without relying on technology due to limited availability of electricity for several months. Indeed, we had to leave notes on the doors of neighbors’ homes. We focused less on maintaining meetings at specific times and relied instead on hanging out at community organization offices.

GS: How was feedback managed during the recovery phases?

ID: After the immediate response, we started to hold several community meetings -which we still do until now on a monthly basis- and have since partnered with the Federal Emergency Management Agency (FEMA) and technical experts to develop two plans: the community recovery plan and the community response plan for St. Thomas.

For the community recovery plan -which outlines 23 projects-, we worked with FEMA to strategically plan each of the projects and identify potential sources of funding. Approx. 600-800 people participated in meetings through an iterative process to develop the plan during a period of eight months. So, we first identified the sectors to be prioritized by asking people about the things that they do not want to experience again and we listed them as gaps. We then identified culturally relevant creative ways or solutions to fill such gaps.

For instance, while we were considering to focus on solar energy, food security was the very first concern raised by affected people, in particular having access to healthy food.  So, for all the homes rebuilt, our organization decided to support with food security by helping establish a small garden or community garden where to grow vegetables and fruits. This, in turn, contributed to generate some limited income for people. That is why listening to affected people is very important.

In addition, as part of disaster case management, we conducted a vulnerability assessment based on income, age, number of family members, etc. which took weeks to be developed.  This vulnerability assessment helped with prioritization of our responses to the needs of affected people. So, the higher one individual or household is to the more vulnerable they are. The problem is that, when working with communities like those of St. Thomas, you see that many people are all highly vulnerable and need immediate attention with limited resources.

GS: With whom did you partner or collaborated in this effort to provide a response?

ID: During the aftermath of the hurricane and the following year, in addition to mapping the needs of affected people, we had to connect with the government, local small businesses, nonprofit organizations and the diaspora to ensure a response. Many of them stepped in without the need to ask. Since we are a small island, there were approx. 25 local nonprofit organizations that kept things going on initially in 2017, before the local government started to take the initiative. Over time, many of those non-profits have reverted back to their original mission but have plans to activate emergency response as needed.

In fact, the second plan in which we are still working is the community response plan for which we mapped assets and every nonprofit and small business in the island. The hope is to have a strong understanding of the current resources available, highlight gaps and needs, and work long-term to fill these gaps and build local capacity.

GS: Do you have any recommendations which you would like to share on how feedback could be handled in the current COVID-19 pandemic?

ID: It is important to trust local knowledge, including the elderly who survived previous strong hurricanes. Yes, we need external help after a storm but aid workers and practitioners’ mindset should recognize the importance of local knowledge. That is, local people know what is needed the most. So, for people who come in to help need to put local people at the center of their efforts. Furthermore, long-term recovery should include capacity strengthening at the local level, as well as training a new wave of disaster management practitioners that can be activated when needed. 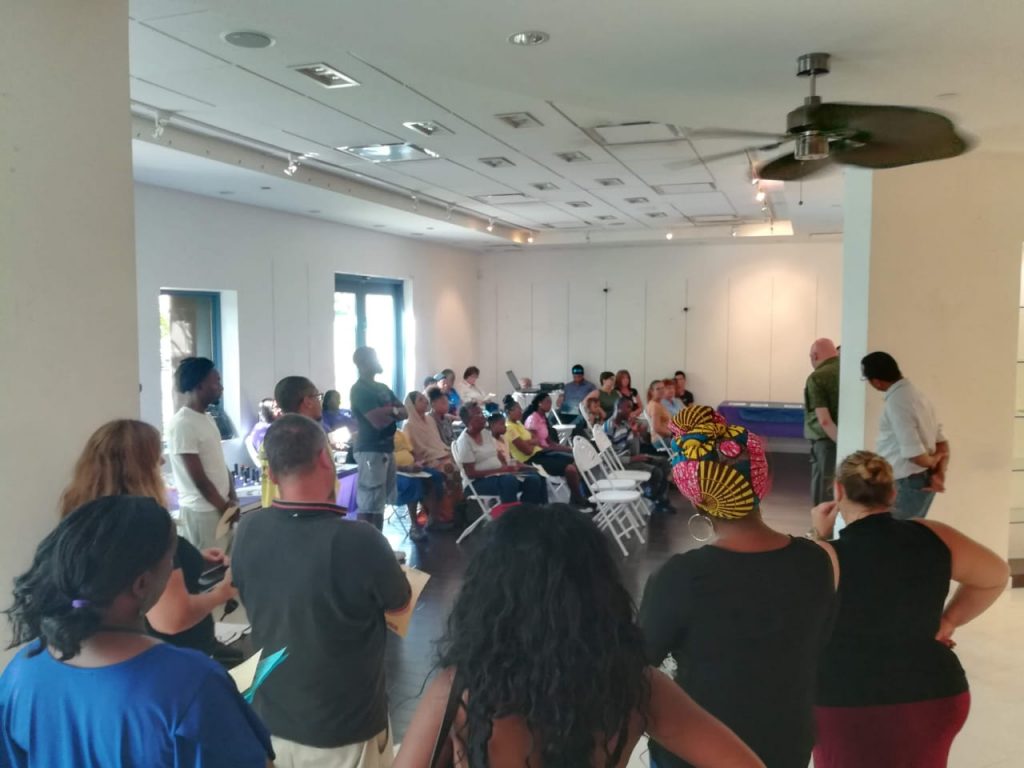