Feedback as a driver to promote inclusive and equitable change

Home » Feedback as a driver to promote inclusive and equitable change 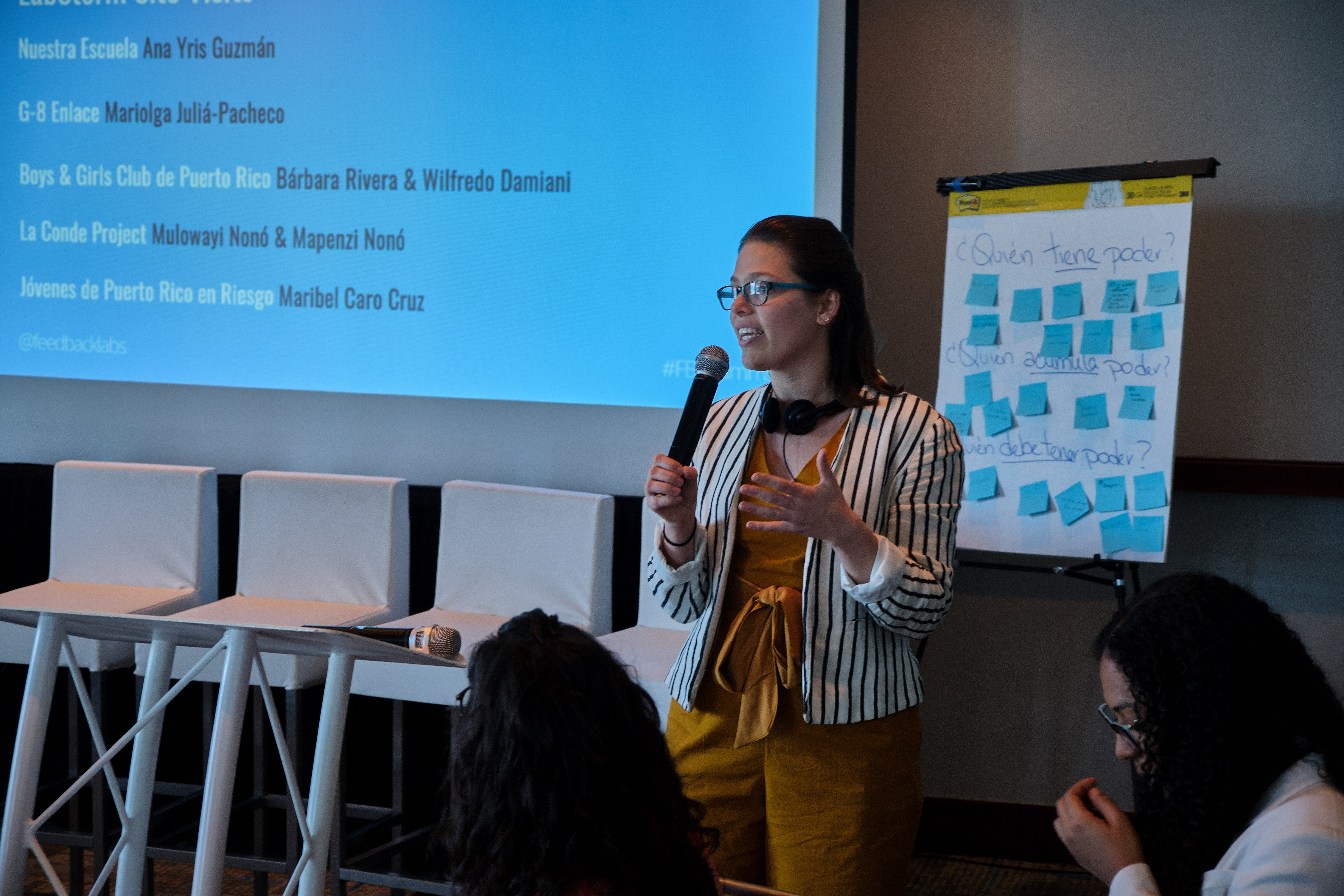 Formally launched in 2014 with 8 member organizations, Feedback Lab serves as the node to support its 600+ organizations in order to make listening and feedback the norm across aid, philanthropy, non-profits, and governments. Feedback Labs was founded under the belief that people should have the ultimate say in the programs and services that affect their lives. In 2018, in cooperation with the larger Feedback Lab network, the Core Principles of Constituent Feedback were adopted. Feedback Lab’s current focus is making feedback the feasible thing to do, that is, how to take feedback practice to scale, and what it looks like to bring feedback into an organization and people’s daily lives.

In her capacity, Meg VanDeusen – who has been working at Feedback Labs for over four years now – is responsible for advancing the community’s learning by providing training, resources and tools on how to implement a healthy feedback practice.

We recently talked to Meg (MVD) to learn more about the evolution of feedback, its relevance in the current context of the COVID-19 pandemic, as well as the meaning of closing the feedback loop and some myths around it.

GS: How do you describe the evolution of the concept and practice of feedback?

High quality feedback practices have the potential to create trusting relationships -for instance, between customers and service providers, or between grantees and foundations. In other words, high quality feedback loops can create space to raise honest concerns and opinions about how constituents’ lives are being affected by the work of service providers.  As such, feedback can help us hear from vulnerable communities and advocate for inclusive and equitable change. However, feedback has to be done well. We continue to account for the barriers to a good feedback practice, if the feedback is not designed properly, it could also hurt relationships or lead to change not being equitable.

GS: Why is feedback important in the current context of the COVID-19 pandemic?

MVD: Feedback can help prioritize the needs of communities but also identify the most effective solutions in reaching the most affected and least heard people during the crisis. Establishing trusting relationships through healthy feedback practices for equity is critical in getting those responses to the communities during the COVID-19 pandemic. A few years ago, we saw the role that feedback could play in overcoming a crisis such as during the Ebola response, and we are now learning from what happened then to think about what it looks like in our COVID-19 response. The key right now is to not stop listening! By prioritizing listening and giving people time, space, and multiple avenues to provide feedback, you’re able to save valuable time and money and identify the most effective solutions to address the needs of those you serve.

GS: Are some categories of feedback more frequently sought than others?

MVD: The type of feedback collected and the way it is gathered will depend on the context and goals. Within each of the Global Standard’s commitments, there might be different goals or methods deployed.

As I look at some of the Global Standard’s 12 commitments, the most effective way to engage with feedback, for instance, for ‘empowered and effective staff and volunteers’ in Cluster C is going to be very different from the most effective category of feedback for ‘women’s rights and gender equality’ in Cluster A. So, during the design stage of the feedback loop, we encourage organizations to dig into the local context of their own constituents in order to determine the kind of feedback sought and how it will be collected.

If we look at the Global Standard commitment # 2 on ‘women’s rights and gender equality’, it comes to my mind an example from the International Planned Parenthood Federation (IPPF), one of our network members. IPPF’s work in India relies on client satisfaction surveys from the women attending their clinics. But even with an abundance of data, there were questions around the honesty of the feedback and other barriers while the feedback was collected directly from the doctors and nurses.  Through a Feedback Labs LabStorm, IPPF developed a plan to triage the feedback. They began to test a Net Promoter Score (NPS) feedback system, and due to illiteracy rates of the population, they incorporated pictures as part of the feedback collection process. In this way, IPPF was able to reach more women in their clinic, including illiterate segments of the population. This example highlights the need for a tailored approach to determining a feedback process across the different commitments.

GS: What does it mean to close the feedback loop?

MVD: The feedback loop includes several stages. It starts by involving all stakeholders -from decision-makers to the wider community-  and seeking their buy-in to the feedback process, including understanding why it’s being collected and what will be done with the feedback data. It is followed by the design stage where it is essential to pay attention to the context in which the community operates. Then comes the feedback collection, for which there is a wide range of methods for collecting feedback -from focus groups to surveys, from suggestion boxes to SMS. The collection process and questions asked must match with the community context you’ve designed for.  Then, data analysis is conducted within the organization to help make sense of the data received. Yet, before jumping into the actions to be taken, there should be a period for dialogue where you bring back the data to the community from which you collected feedback and verify the key findings. This is the time to ask if these were the messages that they were telling us, if the organization made sense of the data correctly, if there are other elements that have been missed. Here, you can bring members of the community to help in the “sense-making” of the data with you. The final stage is course-correction, where changes are made based on the feedback collected. We call it “closing the loop” when you communicate what you heard and the changes you’re going to make, back to the community.

GS: Which are the main myths in managing feedback?

MVD: Three different arguments are usually mentioned which might prevent someone from soliciting feedback: the time, the costs and the inability to respond.

Many civil society organizations feel that they are already overworked and underpaid. They do the important work because they care deeply about what they do, but the idea of adding another layer of work seems to be very daunting. But soliciting feedback does not have to be extremely costly or take a lot of time. While it requires some initial funds and time invested upfront, it is possible to save significant time and money down the road by “getting it right” early – feedback can help you understand what the community actually needs before investing in solutions. It has the ability to create better outcomes.

Another myth we hear is that it is impossible for organizations to respond to the feedback in the way they would like to, which discourages them to do so. Indeed, this is one of our key principles of designing feedback practice: don’t ask questions which you know that you will not be able to respond to because it will decrease trust.  Instead, you should ask actionable questions and prioritize them. It is important to keep in mind that you may get feedback from the community that contradicts itself as some community members may feel one way while other community members may feel another way. It is also important to explain the reasons why you are not able to respond to some feedback at that time without ‘sweeping it under the rug’.  So, we use a simple methodology for feedback collected: what you said; what we heard (and you get the community in a dialogue about it) and what we are going to do about it.

GS: Do you have any advice on how to measure and evaluate feedback work?

MVD: There is no silver bullet, but there are some key principles to be considered when you embark on a feedback practice that include how you might measure it. So, when you think about how you are collecting feedback, one of our core principles is to report it externally, that is, not only to the stakeholders that were involved in the feedback process.  So, you need to think about what you would like to be reporting externally, as well as what information others are going to ask about; and thus, use it to guide within your context what measuring feedback looks like. For instance, for feedback collected during our training courses -while we have adapted them several times based on feedback- we still measure the impact by what the trainees are doing in their organizations and inviting them to share back how they are applying it in their own work. Another key principle is to ensure that feedback is free of harm – so when considering ways to measure and evaluate your work, make sure to avoid being extractive.

This will look different for each of the Global Standard commitments.