Why accountability in an emergency context?

Home » Why accountability in an emergency context? 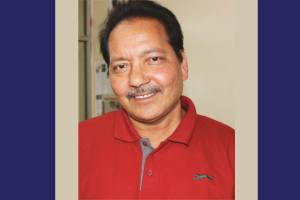 Bijay Kumar has a long track record in humanitarian and development work across several regions. A former board member of the Humanitarian Accountability Partnership, and of the CHS Alliance, and former director of ActionAid in Kenya, he is currently the executive director of GNDR, the Global Network of Civil Society Organizations for Disaster Reduction. GNDR is the largest international network of civil society organizations committed to working together to improve the lives of people affected by disasters worldwide. We recently talked to Bijay Kumar (BK) to examine accountability in humanitarian assistance regarding three issues: What? Why? How?

GS: What does humanitarian accountability mean? Which are its key elements or dimensions?

BK: From my own understanding, a broad definition of accountability means ‘the responsible use of power’. In society, there are always power relationships, in which power is one’s ability to influence someone’s else behavior and action. This power can come from one’s knowledge, skills, strength, and/ or confidence. The purpose of the power analysis is to examine how to address unequal power.

In practice, this raises a question: Who are we accountable for our actions? The answer is that we have to be accountable to the people whose lives one seeks to change or impact.

During a hazard, the community does not have the capacity to cope with the sudden changes in society and it becomes a disaster. Therefore, in a humanitarian context, we are accountable to people so they can analyze and make decisions in emergency situations.

Thus, when the Core Humanitarian Standard (CHS) on Quality and Accountability was adopted in 2015, three elements came together: accountability to affected people; the quality standards to which one is committed to deliver; and internal accountability – that is, accountability to one’s own staff. In this way, the concept of accountability got expanded and became more comprehensive and directly related to the core issue, shifting power from the international system to community led capacities.

GS: How has humanitarian accountability evolved over time?

BK:  From my experience with the International Committee of the Red Cross (ICRC) in Rwanda in 1993, I remember coming across the ICRC 1994 code of conduct – which, among other issues, underscored neutrality and impartiality. In 1997, People in Aid came with its own Code which emphasized good practice in the management and support of aid personnel, and the Sphere Standards – for specific technical areas such as a water, sanitation & hygiene; food security & nutrition; shelter and health, was also approved.  In turn, in 2003 the Humanitarian Accountability Partnership (HAP) came up with its own standards. By 2010 these three organizations started discussing how to come together, and a Joint Standard Initiative was launched in 2013, around the same time that conversations about the Global Standard for CSO Accountability were initiated. These are some key milestones of a brief summary in the evolution of accountability standards in the humanitarian sector from a civil society perspective.

GS: What are currently the main challenges for humanitarian actors to advance accountability?

BK: There is one fundamental challenge: people’s mindset.

First, in a typical humanitarian context, there is a sense of gratitude among affected people when humanitarian assistance is provided. Yet, in occasions, this tends to lead to an increased and disproportionate feeling of power among some humanitarian workers, which also becomes the most disempowering factor for disaster-affected communities.  Thus, it is important to recognize and have always in mind that disaster-affected people are partners in the relief and reconstruction change process, and not victims or beneficiaries. However, it is difficult to change this mindset and address these unequal power relationships.

Second, given the large amounts of resources usually made available by international cooperation, which come together with some privileges or perks – such as access to hotels, cars with drivers, etc. – some humanitarian workers get distanced or detached from reality and become unaccountable to the affected people. This happens even if those resources are made available particularly to help the affected people. Therefore, instead of only being accountable to those who provided resources, humanitarian workers and organizations have to be accountable to those people whom they are committed to work for and with.

Third, the demand for accountability during disasters is rather low among the most affected people. Here it is worth noting that there is a differential impact of disasters on the population – no one is impacted the same way. During the Tsunami in December 2004 and afterwards, women – as well as children and refugees – were more impacted. However, international humanitarian workers, even maybe with good intentions tend to connect to the middle class from the areas affected by disasters, instead of to the people most affected. This prevents humanitarian agencies from becoming more accountable to the most affected people during disasters.

Fourth, the government counterparts are also struggling during a disaster and they lack effective policies and regulatory mechanisms to make humanitarian aid accountable.

Finally, the notion of one’s being voluntarily accountable becomes a problem. The real question is whether we are offering to be accountable and about what, or if the community is asking us to become accountable.

GS: Can you elaborate further on ‘the need for CSOs to be held accountable to cooperate’ in a humanitarian aid context?

BK: One of the GNDR assumptions is that disasters are hazards but which are not properly prevented. Disasters can be prevented. In this regard, COVID-19 could have been prevented; this is not the first time that society faced a pandemic.

Second, any hazard has a differentiated impact on people. For preventing a hazard into becoming a disaster, the people most susceptible to be at risk must be targeted. This – in turn – entails analyzing risks from the perspective of the people most at risk. Given that, in many cases, governments are not in a position to protect the rights of these people, CSOs need to facilitate the process where communities most at risk conduct a risk analysis (such as drought, water, floods, hurricane) and integrate it into the planning process at the local level. These plans then should get integrated into local governance processes and structures by the authorities. These plans must inform a bottom up planning process into regional and national level, where coordination is needed and communication among the various international frameworks (SDGs, UNFCC action plans, Sendai Framework for Disaster Risk Reduction, New Urban Agenda- Habitat III, etc.). When these agreements get down to the local communities, in many occasions these commitments need to be implemented by the same local officer.

So, in GNDR, we encourage civil society to come together and facilitate this process at local level and ensure that such voices of the most at risk people are heard at the national and global level. This can only happen if we learn how to collaborate.  For this, we need to commit to collaborate and become accountable to it. Yet, right now, we do not have a mechanism to do so. Our GNDR strategy includes a section on accountability which is work-in-progress. In this regard, one of the twelve commitments from the Global Standard for CSO Accountability – that is, commitment #6 – is on strong partnerships, which seeks to address the challenges raised by working in silos and the lack of coordination, resonates with our preaching, as lack of coordination prevents to achieve the expected results of a better life for the people we aim to work for.

GS: What would be the key indicators for the humanitarian assistance to report on accountability issues?

The Global Standard commitment # 1 on Equality and Justice is a crucial dimension from which to think about how to report on humanitarian assistance work’s own accountability efforts. For most vulnerable groups, living their life with dignity – that is to have control over the basic needs and resources – is the most important issue. So, the question we should all pose is: how does our contribution make a difference in the most vulnerable groups’ lives while taking their inputs into account?