The Rendir App. A friendly and easy way to use self-assessment tool on the Global Standard for CSO Accountability

The Global Standard (GS) for CSO Accountability is a reference standard that aims to advance a concept of accountability in which civil society organizations are strongly connected to the people they work with, as well as to their partners, allies and donors in order to increase trust and enhance impact. This notion is captured under the concept of “dynamic accountability”.

The Global Standard was developed by ten initiatives from different geographic regions of the world through a participatory process that encountered a variety of challenges. These challenges arose precisely from the diversity and breadth of the actors involved. The task of developing a standard that could be adapted to organizations from different geographic regions and sizes, and with different institutional arrangements, as well as different approaches and thematic focus, availability of financial and human resources, and level of engagement (ranging from local, to national, regional or international level) was a very ambitious goal. The effort to develop a tool that was specific enough, but at the same time sufficiently broad to fit the diversity of organizations was a great challenge. Yet, after two years of work, such goal was finally achieved!

However, the adoption of the GS was not the end of the process, but its starting point. This is a reference standard, made up of 12 deliberately aspirational commitments which are to be adapted according to the specific needs and context of a particular organization. As stated in its own GS Guidance Manual: “the nature of the Global Standard as a voluntary reference standard entails that each organization must adapt it to its own characteristics, institutional capacity and cultural context”.

Therefore, if the first challenge for developing the GS was to take into account the complexity and diversity of civil society, the second challenge was to get the commitments grounded and to translate or operationalize them through accessible and valuable mechanisms, processes or tools for a wide range of organizations from different contexts.

In contrast to other standards, there is no external body to certify the process or a seal of approval granted for the GS.  The GS is neither a requirement imposed by donors in order to access funds or grants, nor a pre-requisite from government in order for CSOs to operate or benefit from tax exemptions. For implementing the GS, the only incentive is an organization’s desire to improve its own practices. It is thus a self-regulatory exercise, through which an organization or CSO network voluntarily decides to evaluate itself against the commitments of the Global Standard in terms of the extent to which they are fulfilled, and where opportunities for further improvement are needed. The process for carrying out this self-assessment varies across organizations, so a diverse set of tools have been developed by the GS partner organizations. However, it is clear that these are complex processes which require investment of time and resources.

From the Instituto de Comunicación y Desarrollo (ICD) and within the framework of the Rendir Cuentas initiative, a tool was developed to help with CSO self-assessment in relation to the GS commitments. This tool comprises a set of 48 indicators (both progress and feedback-related indicators), and a process through which each organization can evaluate itself in relation to the GS 12 commitments and identify its areas for improvement. It is a comprehensive tool that seeks to address all elements of the GS, and – in particular – its focus on dynamic accountability. However, like any ambitious effort, its implementation requires time and human resources, which are generally scarce among CSOs. 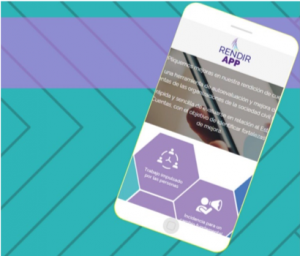 Against this backdrop, in 2018, the application Rendir APP was launched as a result of a co-creation exercise between ICD and Transparencia por Colombia – Red ONGxT, and with support from the Latin American and Caribbean Innovation Fund and Tides Center.

Rendir App is an online app, accessible through any kind of device, whose main purpose is to carry out a self-evaluation in regards to the GS, yet in a faster and simpler way, that is, without consuming significant time or human resources. While based on the first self-assessment tool, this app version is more agile and easy to use, as it does not require collecting evidence or getting together as a team to conduct the evaluation, not it demands to make decisions within an organization. The app guides the user throughout 24 questions, getting as a result an overall description of the situation of one’s organization in relation to the GS, as well as recommendations for each of the indicators according to the answers provided. The result of each exercise is confidential, so it does not get disseminated, and no ranking is developed. The Rendir App is available both in Spanish and English, and since the beginning of this year it also became available in Macedonian through a cooperation agreement with the Balkan Civil Society Development Network (see post here)

As for its benefits, in addition to what has already been mentioned, it has the advantage that it can be applied as many times as desired, by the same person or by different people in the same organization. So, it could be used for multiple purposes. In addition to its more conventional use, that is, by one person individually, it can also be an exercise conducted by a team or a group within an organization (e.g., the board of directors, the management team, the field offices, volunteers, etc.). It can also be applied by a group of people with different roles or from different units within the same organization; by all of its members; or by some external partners or allies. In all cases, it can be proposed as an individual and anonymous exercise, after which an open space for exchange and debate about the results could take place, or it can be carried out as a collaborative and participatory exercise. 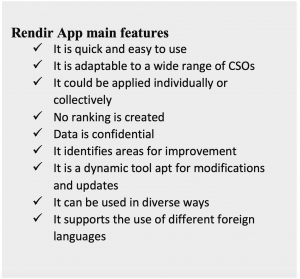 The Rendir App offers many possibilities; however, it also presents some shortcomings which need to be taken into account. First, given that it is a self-managed and voluntary app, if an organization does not develop a plan to implement the results of the exercise, the process of generating improvements will be hindered. The tool itself does not yet offer a plan for improvement, nor does it monitor or follow up on changes. This limitation could, however, be overcome by conducting an initial exercise which could serve as a baseline and a subsequent one – once the improvements have been implemented – in order to evaluate the changes introduced. But, for now, this possibility depends on the will of an organization and is not a functionality provided by the system.

Second, the main purpose of having a quick and easy tool of self-evaluation means that the range of issues addressed by each of the GS commitments cannot be covered in depth. Yet, the app is easily adaptable, which enables to introduce changes or to add questions as needed.

Third, the app includes a list of questions and answers based on a closed-end format so, in some occasions, thy may not be adjusted to the reality of a particular organization or a particular context. Therefore, it is up to each person to decide if any given questions or answers do not correspond to her/his own reality and to keep this in mind when reviewing the recommendations.

To conclude, it is important to underline the enormous potential for adaptability and different uses allowed by the tool, highlighting some examples and future prospects.